I’ve got a few kid’s books that from a little over a hundred years ago about some semi-anthro talking animals who looked like animals and wore a little clothing. If I remember right, C.S. Lewis called this style of animal character Dressed Animals(probably from his biography by Walter Hooper) where they were in a realistic style, wore some clothes, but often walked on their hind legs and acted more human. The Beatrix Potter stories are probably the best known and some of the highest quality stories of this style, and other than hers, I think this style of childrens books has mostly faded into obscurity.

It started for me when I was like 13 or 14 when my grandma gave me some books that had belonged to my great-grandpa and his brother when they were growing up. I found the stories to be bland at best and pretty boring, considering I was already reading unabridged Robinson Crusoe around that time. I mean bedtime storybooks from 1917 just aren’t great reading for a teen. However, I was never the kind of teen who was like “Eww, those books are for babies!”, so I kept good care of them.

A couple of those had some pretty good illustrations though. I mean, a woodchuck who dresses in super tacky 1920’s fashion is hilarious. Here’s a picture from the Project Gutenburg ebook of it. 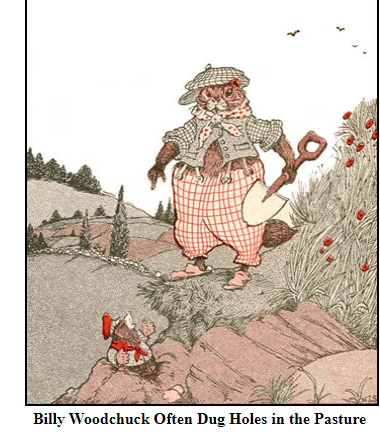 A couple years later, my best friend and I were coming back from an event on the church bus and he started talking about some stories his mom used to read to him. As I was listening, I thought a few of those characters sounded familiar. As soon as I got home, I dug out my old storybooks and sure enough, his books were in the same series as my 100 year old copy of The Adventures of Poor Mrs. Quack. 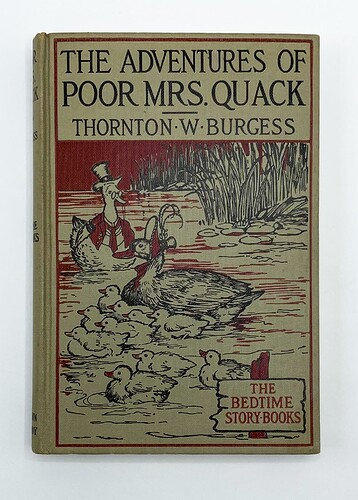 The next time I went to his house, I brought my book with me. He was amazed that the series he had only known from reprints was that old.

Trying to find some more information about my old books, I found out that Thornton W. Burgess’s Bedtime Storybook series got a Japanese tv series in the 1970s called Fables of The Green Forest. Naturally, I found the English dub on youtube and watched the Poor Mrs. Quack episode.

Did anyone else have experiences with these “dressed animal” type stories? I thought it would be fun to share mine.

That art is great! Really classic. :3

I don’t really have any specific examples, but I always loved those kinds of books when I was a kid. I guess it makes sense, considering I became a furry!

Well, I always had a particular fascination for those books when I was younger, and now I consider those times my “early furry stages” lol. I just loved the idea of lovely animals dressed in human clothes (I don’t mean like how some people put their dogs in cute shirts or anything, I liked the elegant, somewhat old/vintage fashion), using human items, and doing human-like things. I don’t think I have any of those old books any more unfortunately so I can’t show you anything but, y’know, this is just how I feel about cute storybooks like those. :3